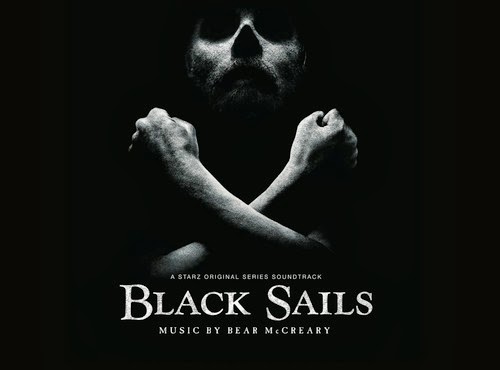 “Gorgeous, cool, and thematically on target, these credits are like a haunting dream you might have after touring a sculpture museum and hitting Disney’s Pirates of the Caribbean ride on the same day. And that theme! Arguably McCreary’s best, and that’s saying quite a bit.” – James Hibberd (Entertainment Weekly)

Though the two worked closely on a grand orchestral score for Human Target, McCreary and Steinberg both knew a similar approach wasn’t going to be right for BLACK SAILS.  “While I have worked with Bear before building big, thematic orchestral scores, this show needed something almost exactly the opposite,” said Steinberg.  “Stripped down.  Gritty.  A sound and a musical language that would be the last thing you’d expect to hear in a pirate movie, yet something that could still convey the raw human emotion of the story we wanted to tell.  And Bear found it.”

“My goal was to create music that sounds improvised by an exhausted crew aboard a ship navigating choppy waters,” said McCreary. “I wanted the audience to sense dirt beneath fingernails plucking jangly mandolin strings, to feel urgent strains of a hurdy gurdy crank, and to smell stale air wheezing out of old accordion bellows. To achieve this, I had to rethink my entire creative process and unlearn the results of a lifetime of classical music study.”

It’s this sort of out-of-the-box thinking that led WIRED Magazine to call McCreary a “Secret Weapon” in a recent issue.  His unique combination of atypical instrumental background (he is a professional accordionist) with rigorous classical training prepared him to compose for disparate genres.  By the age of 24, McCreary was launched into pop culture history with his groundbreaking score to Syfy’s hit series Battlestar Galactica, for which he composed “the most innovative music on TV today” (Variety). It “fits the action so perfectly, it’s almost devastating: a sci-fi score like no other” (NPR).  Io9.com declared Bear McCreary one of the Ten Best Science Fiction Composers of all time, listing him alongside legends John Williams, Jerry Goldsmith and Bernard Herrmann.

A recent Emmy® Award-winner for Da Vinci’s Demons, McCreary also composes for Marvel’s Agents of S.H.I.E.L.D. – the #1 debut of the 2013 fall season with 11.9 million viewers, and The Walking Dead, which shattered records with 16.1 million viewers for its fourth season debut.  In addition to scoring the #1 new show and the #1 returning show in 2013, McCreary’s current projects also include the upcoming Ronald D. Moore series Outlander for STARZ, the second season of Da Vinci’s Demons, and the Syfy series Defiance.

From rural Georgia to a Battlestar, from the Italian Renaissance to a post-apocalyptic St. Louis, McCreary’s projects have taken us on many voyages.  This latest journey takes us to 1715.  The Golden Age of Piracy.  New Providence Island is a lawless territory, controlled by history’s most notorious pirate captains.  The most feared is Captain Flint.  As the British Navy returns to redeem their land and exterminate Flint and his crew, another side of him emerges.  Captain Flint aligns himself with Eleanor Guthrie, daughter of the local kingpin, to hunt the ultimate prize and ensure their survival.

“For the instrumentation of BLACK SAILS,” said McCreary, “I wanted to focus primarily on historically accurate sounds. In place of soaring strings and ripping brass, I brought in a string quartet, rhythm guitar trio, percussion duo and various historical solo instruments. Most of this merry band had worked with me for the better part of a decade, and they too had to unlearn our old habits.  For the first time, I dropped my ruthless pursuit of rhythmic perfection and intonation precision and asked them not to play ‘too perfectly.’”

McCreary would also choose two instruments from his own repertoire – the accordion and the hurdy gurdy. “For the first time in my career, I suddenly found myself a primary soloist in my own music, which was great fun because I always love the opportunity to play and perform.” he said.

“When we set out to re-imagine the idea of what a pirate movie could be, we knew we would have our work cut out for us.  We knew that in order to convincingly tell a story about the reality of these people’s lives, we would somehow have to figure out a way to make the show feel substantially, noticeably different than any pirate movie anyone had seen before,” said Steinberg.  “This meant a different visual style.  A different tone in the way people talked and the things they talked about.  And, of course, it meant a very different kind of music.”


How does McCreary describe the score?  Simply, “Raw.  Filthy.  Salty.”

Sparks & Shadows presents the BLACK SAILS – A STARZ ORIGINAL SERIES SOUNDTRACK, available digitally and on CD on January 28, 2014.  The first 360 people who purchase the CD through www.lalalandrecords.com will receive their copy autographed the composer.