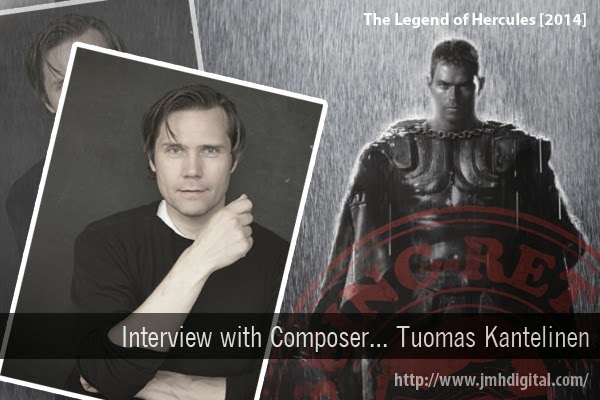 I want to say, AWESOME... and thank you to Tuomas Kantelinen and great friend Beth for putting this together... Talent is right here, Thank you!
Jeremy [HWR:OLM]: How did you get started in the field of music and how did that lead you to composing?

Tuomas Kantelinen: I grew up in a very artistic family, and my grand mother was a music teacher and even founded a music academy in Ostrobotnia (Western part of Finland) where we lived. So I started playing several instruments at a young age. I remember very well that I had to take a detour not to see all my school friends who were playing football in the same team with me, as I was heading to my organ lessons in the local church... It may have seemed very uncool and nerdy then, but of course it all paid off later... I went to the Sibelius High School that specialized in music, as well as the Sibelius Academy in Helsinki, where I studies for six years. I started composing more ambitiously when I was around 15-16 years of age, and got enamored with scoring film music some years later. I am a fairly sociable person, so I liked the added benefit of collaborating with a director while still creating some music that was my own. I get inspired by seeing the picture of the film that I'm working on, but I also work on more 'classical' concert and stage pieces, like the 'Snow Queen' Ballet that I recently composed for the Finnish National Opera. I have done an opera and some concertos as well, but all in all I like that there is a visual aspect in addition to the music.

Jeremy [HWR:OLM]: Please tell us about your latest score release “THE LEGEND OF HERCULES” how do find your inspiration for projects, how did you become involved and how much musical freedom did you have?

Tuomas Kantelinen: I have know director Renny Harlin for a long time (we're both Finns) and we had worked together on his thriller Mindhunters almost ten years ago. With Hercules I was involved from the very beginning of Renny's involvement in the project, and even composed some cues that were played on set when he was shooting the movie. Renny wanted to the music to be epic and sort of 'old-fashioned' in the vein of classic swords and sandals movies, so we happily went full orchestral with grand themes and big action music. Renny is a very enthusiastic director, he gives a lot of artistic freedom and is nearly in tears when he hears a theme that he loves. For battle action of course every scene is bigger than the previous one, every fight more spectacular, so it's a wonderful challenge to try to variate the music and bring in little mini-themes, while keeping it active and exciting.

Jeremy [HWR:OLM]: If you work with other composers or music artists, whom do you work with and what is the best part of your contributions?

Tuomas Kantelinen: I love to work with others and I feel there is a lot to be learned from every professional - and human being - out there. For Hercules I reunited with my trusted friends, engineer Geoff Foster from Air Studios and orchestrator Matt Dunkley. I also used three wonderful singers - talented twins Nicki and Tanya Wells from the UK and my own sister Karoliina Kantelinen, one of the singers of Finnish folk music group Värttinä. All of them are well-versed in many ethnic traditions and were able to bring their expertise to the table.


----------------------------------------
Film music composer Tuomas Kantelinen (THE LEGEND OF HERCULES, PURGE) studied classical composing in his native Finland and continues to make music for both cinema and concert audiences. Kantelinen has scored orchestral film music for over 30 feature films, including Klaus Haro’s awarded MOTHER OF MINE, Sergei Bodrov’s epic MONGOL: THE RISE OF GENHIS KHAN, and Rosa Karo’s THE ITALIAN KEY, which earned Kantelinen several awards.
Hosted by Jeremy [Retro] at 11:23 AM

A lot to be learned from every human being - that is so true.
Cool that you got to create some music early for the movie so they could use it while filming.
And what instruments do you play, Tuomas?

I loved the music in Bodrov's MONGOL and I'm looking forward to hearing what you did in HERCULES!