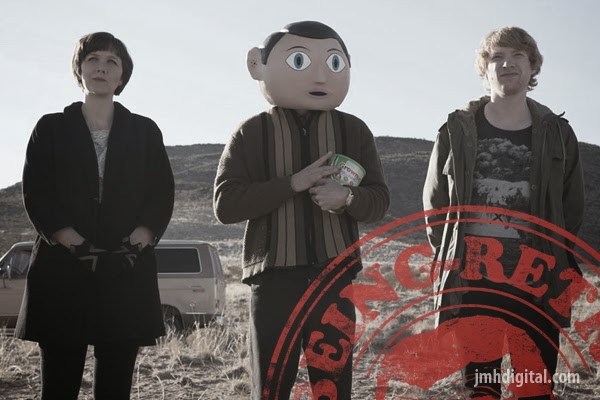 Park City, UT (January 24, 2014) – The Wagner/Cuban Company’s Magnolia Pictures announced today that they have acquired North American rights to FRANK, an offbeat comedy that just had its world premiere to critical acclaim at the Sundance Film Festival. Directed by Lenny Abrahamson (What Richard Did, Garage, Adam & Paul), the film was written by Jon Ronson (The Men Who Stare At Goats) and Peter Straughan (Tinker Tailor Soldier Spy).  FRANK stars Domhnall Gleeson, Maggie Gylenhaal, Scoot McNairy and Michael Fassbender as the titular character, a brilliant and eccentric musician who wears a giant fake head at all times.

Gleeson plays Jon, a wannabe musician who finds himself out of his depth when he joins a maverick pop band led by the enigmatic Frank (Fassbender)—a musical genius who hides himself inside a large fake head—and his terrifying sidekick Clara (Gyllenhaal). It is a fictional story loosely inspired by Frank Sidebottom, the persona of cult musician and comedy legend Chris Sievey, as well as other outsider musicians like Daniel Johnston and Captain Beefheart.

“All of us at Magnolia were completely taken with FRANK,” said Magnolia President Eamonn Bowles. “It reaffirms the considerable talents of Lenny Abrahamson, who has delivered a beautiful, poignant and hilarious film that speaks on many levels about being an artist. That Michael Fassbender can be so affecting while encased in a papier-mâché head proves that he is one of the greatest actors working today.”

Speaking from Park City Lenny Abrahamson said: “I’m delighted that FRANK has found a home in the US with Magnolia. Eamonn Bowles was an early fan of my first film, Adam & Paul, and I know that the team there has a genuine passion for FRANK. Along with their skill and experience this makes them the right partners to bring the film to its audience here.”

Producer Ed Guiney said “Magnolia is an incredibly innovative and exciting company and we have long wanted to work with them. They are the perfect partners for FRANK and we could not be happier that we have landed with them and we are very excited about their plans for the US.”