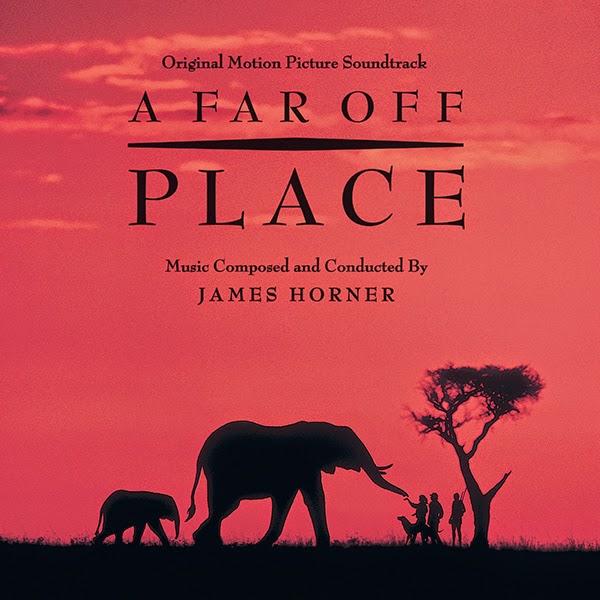 Combining epic adventure, intimate character drama, fierce action and a good-sized dose of exotic color, the 1993 Disney film A Far Off Place provided Horner with a broad canvas, inspired by the novels of Sir Laurens van der Post. Many of the elements that feature prominently in Horner’s score are present from the film’s opening minutes. The first music to appear is an idyllic passage highlighting flute and gentle percussion, used to underscore establishing shots of an elephant herd at a watering hole. Horner returns to this tone later in the film, using it to emphasize the underlying harmony of life on the savanna—even in seemingly inhospitable locations. Here, however, Horner’s expression of peace is violently interrupted by his jarring music for the poachers. Horner paints the band of killers with rampaging percussion, low brass and piano, both here and during the later scenes of slaughter at the lodge. These initial minutes serve as a prelude to the entrance of Horner’s sweeping, majestic main theme for the film. Strings and flute are the instruments most prominently associated with this theme, while also featuring statements for winds and brass. Shakuhachi also makes its first appearance here, punctuating the music with intense, breathy flourishes.  It almost serves as an overture for the score and story to come.

The scoring sessions for A Far Off Place were originally recorded on 2” 24-track tape over five days during January 1993 (with additional sessions in February for keyboards and percussion), then mixed down onto ¼” Dolby SR-format two-track tape by engineer Shawn Murphy at Todd-AO. They were vaulted on DAT, and our expanded CD was mastered directly from those DAT masters.  This new presentation has been remastered and lavishly expanded with more than half an hour of additional material not featured on the 1993 release.

The film tells the story of Nonnie Parker (Reese Witherspoon), the teenage daughter of local gamekeepers, and her relationship with a tourist boy named Harry Winslow (Ethan Randall, now going by Ethan Embry). When Nonnie’s parents and Harry’s father are murdered by a band of poachers working for corrupt ivory smuggler John Ricketts (Jack Thompson), the children decide to flee across the arid wastes of the Kalahari rather than risk certain capture by trying to reach a nearby village. They are guided on their journey by Xhabbo (Sarel Bok), a mystical youth who communes with nature and whose visions seem to portend the future. It is Xhabbo’s timely intervention that spares Nonnie and Harry from the poachers’ slaughter, and his wisdom that allows them to navigate the desert as they strive to reach Nonnie’s uncle, the poacher-hunting Col. Mopani Theron (Maximilian Schell), before Ricketts and his thugs ride them down.