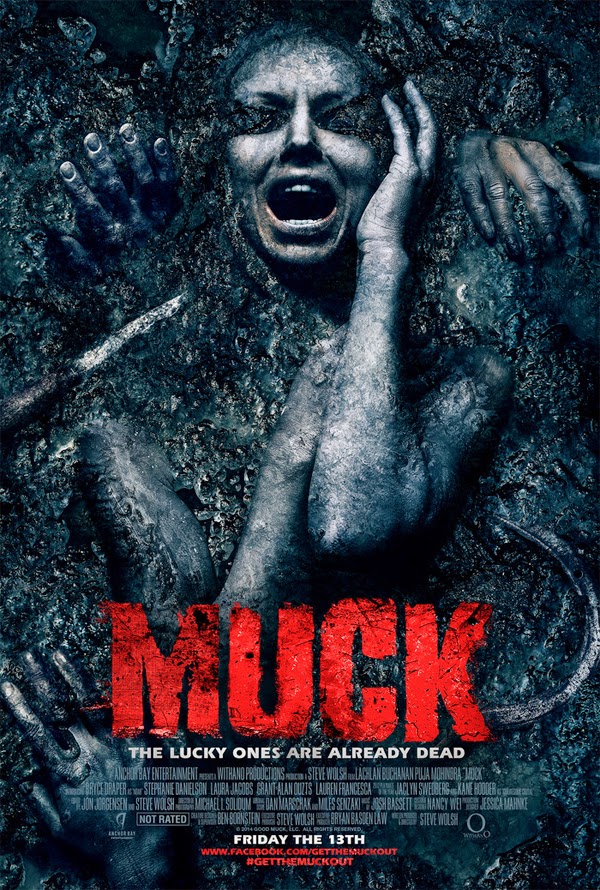 Anchor Bay Entertainment has unveiled the first Official Theatrical Trailer for MUCK, as well as new exclusive poster art (attached). Horror and gore fans alike should feast their eyes on this freshest take yet on the MUCK trailer, viewable on the main page of the Muck Kickstarter: bit.ly/MuckKickstarter.

Speaking of Feast, the MUCK Kickstarter campaign to fund the prequel, MUCK: Feast of Saint Patrick, is still under way, and recently surpassed the $200,000 mark on the way to the goal of raising a quarter of a million dollars. Just like the original, the MUCK prequel will boast death-defying stunts and practical effects, shot without the use of CGI – all in 4K Ultra HD.

As a production company, WithAnO wanted to give fans and Kickstarter backers alike an insight into what they’re supporting, and so recently released this exclusive, behind-the-scenes footage of one of MUCK’s incredible stunts: http://youtu.be/VzU2RZettks.

The daring stunt-woman in this case is Alexa Marcigliano, and her courage is palpable in the clip, sprinting O.S. through the pitch-black living room before bouncing on a trampoline, then hurling herself through the 4 x 6 picture window, out into the night. To say that hitting her mark was highly important is obviously an understatement. Jump too short, and Alexa would land head-first on the edge of the porch outside; too high, and she would hit window frame; too long, and she would overshoot the padding buried beneath the grass outside. And, since there was only room in the budget for one window, it had to be done in a single take.

These are the kinds of stunts that Steve Wolsh lives to shoot as a writer/director, but these kinds of stunts take time, money, and not least of all, the ultimate creative control that can only be afforded by independent financing. So remember, any mention or write-up on the Muck Kickstarter campaign directly furthers our goal of making another epic, independent horror film for true horror fans. The MUCK franchise is so close to this goal – a goal that at one time seemed insurmountable! – and we have all of you, our loyal supporters to thank.

Email ThisBlogThis!Share to TwitterShare to FacebookShare to Pinterest
Labels: Muck