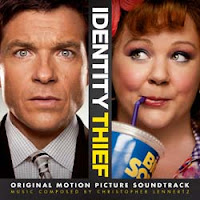 
Mild-mannered businessman Sandy Patterson travels from Denver to Miami to confront the deceptively harmless-looking woman who has been living it up after stealing Sandy's identity.

La-La Land Records and Universal Pictures present the original motion picture score to the smash-hit Universal Pictures comedy feature INDENTITY THIEF, starring Jason Bateman and Melissa McCarthy, and directed by Seth Gordon. Acclaimed composer Christopher Lennertz (HORRIBLE BOSSES, HOP, TVs REVOLUTION and SUPERNATURAL) fashions a rollicking orchestral/rock score that whisks along this riotous action-comedy about a mild-mannered businessman whose identity is stolen by an unpredictable, no-holds-barred woman. Produced by Christopher Lennertz, Todd Bozung and Jess Stroup and mastered by Reuben Cohen, this soundtrack also includes the songs "It's The End Of The Road," performed by Ty Taylor and "The Payback," performed by Amanda Brown. CD booklet features liner notes from the composer and director.

5/5 Funky beats and a runaway comedy of the funniest proportions.... then you have a this moving score with some cool tracks from Ty Tyler, Amanda Brown and score by favorites Christopher Lennertz.I think the combination of music/score is being represented here, you will be able to follow the adventure wonderfully.
-Jeremy [Retro-Z]