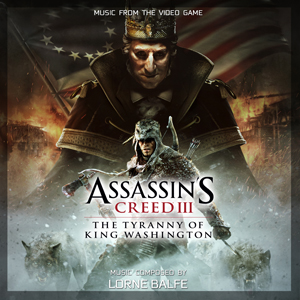 A native of Inverness, Scotland, Lorne Balfe is a Grammy award- winning film composer, known for  composing the scores to the Dreamworks' animation Megamind, and Ron Howard's film The Dilemma, in collaboration with Academy Award- winning composer, Hans Zimmer.  In addition to being recognized for producing two of Zimmer’s Oscar- nominated scores, Sherlock Holmes and Inception, Lorne has also received significant recognition for his work in the United Kingdom.  In 2009, Lorne was nominated for the Discovery of the Year World Soundtrack Award for his score for BAFTA award- winning Crying With Laughter and he was nominated for the prestigious Glenfiddich Spirit of Scotland Award.  He recently earned his second BAFTA nomination for Best Original Music, as well as the nomination for the BSO Goldspirit Award for Best Score for a Video Game with Assassin’s Creed III.

Welcome to Assassin's Creed III's Tyranny of King Washington - a 3-part DLC series exploring an alternate reality in which George Washington goes mad with unlimited power, foregoing Presidency to rule as tyrannical King. In this alternate world, Connor is and remains Ratonhnhaké ton. Having never become an Assassin, he must endure new trials, acquiring the skills he'll need to take down a possessed Washington and win freedom for his land once and for all.

5/5 I am really enjoying the level of video game music and this is no different... this has some amazing score music and if you are a fan....
-Jeremy [Retro-Z]
Hosted by Unknown at 12:00 AM