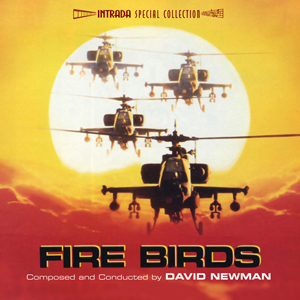 
1990 was a threshold year for composer David Newman’s career: Mr. Destiny, Ducktales the Movie: Treasure of the Lost Lamp and Meet the Applegates were all aesthetically formative scores. Fire Birds was another mile marker, being his first full-blooded action film. With only a few weeks to score the movie, Newman began drafting what were to be heavily synthesized cues. Far from a budget limitation, the choice of favoring synthesizers was a popular stylistic one and one fitting technology’s importance in the film. Newman elected to write for hefty band of live brass players as well—for use in the “rousing,” soldierly main theme, as well as for somber and reflective passages and combat material. The main theme, based on a very Americana, three-note leap, soars at sunrise with the Apaches over the “Main Title,” and issues an exciting call to arms throughout the score. The main tenets of Newman’s score outside the main theme are the plucky training sequences—using a pizzicato string effect, a gentle pop-flavored romance theme, an icy militaristic idea for the baddie, and the action set pieces. Everything is tied up triumphantly with the noble trumpet theme and a wave of electric guitar in the feel-good final scene.

For this release Intrada presents the complete score in crisp stereo from the original 2-track masters.

Fire Birds begins with a helicopter dogfight against a South American drug cartel, in which cartel baddie Eric Stoller (Bert Rhine) guns down Army pilot Jake Preston’s (Nicolas Cage) comrades. The Army plots a retaliatory hit— this time with their new, high-tech Apache gunships. Preston is assigned to air combat training to learn the Apache under commander Brad Little (Tommy Lee Jones). In training, too, is Preston’s former fiancée, Billie (Sean Young), who reignites his romantic pilot light.  With both his eyes engaged and a sparkle back in Billie’s, Preston takes the fight to the cartel and, with the aid of superior birds, blows them out of the sky.