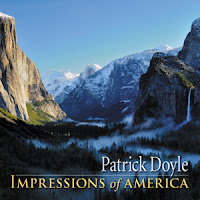 
Doyle’s film scores include such blockbusters as Brave, Harry Potter and The Goblet Of Fire, Rise of the Planet of the Apes, Thor, Bridget Jones’s Diary, Henry V and so many others!  Doyle is a Scotsman who has been coming to America for many years now to bring his incredible music to Hollywood.  These many trips have now inspired their own musical work and Doyle has composed a symphonic piece consisting of fifteen impressions.  Patrick Doyle’s IMPRESSIONS OF AMERICA is a nostalgic look at America ... its landscapes, its traditions, and its people.

Scored for full symphony orchestra, we release Patrick Doyle’s IMPRESSIONS OF AMERICA to celebrate the composer’s 60th birthday in April of 2013.

5/5 Now here is an example of following your own style bringing the world to your "Impressions Of America" as Patrick Doyle has done. Being a fan of his work for several years, Doyle never lets me... lets us down in this telling of his journey.
-Jeremy [Retro-Z]
Hosted by Unknown at 12:00 AM