Cheezy Flicks: Mistress of the Apes 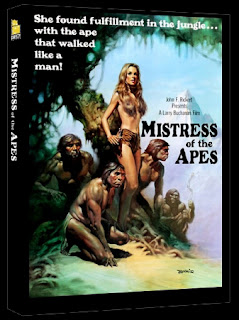 Mistress of the Apes
Original Release: 1979


She found fulfillment in the jungle...  with the ape that walked like a man!

The wife of a famous anthropologist is rushed to hospital in labor. At the same time, crazed druggies raid the hospital looking for drugs, causing the baby to be stillborn. While recovering from the trauma, she learns that her husband has disappeared in Africa. She launches an expedition to find him, and discovers a bizarre world of sexy jungle women!

It was interesting and then it just got weird... well I am sure you have gathered that.
-Jeremy [Retro-Z]

This reminds me of the movies that would suck you into renting them just because of the cool covers on the tape cases.