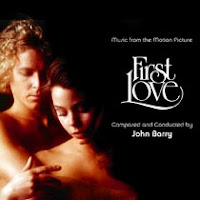 
La-La Land Records and Paramount Pictures present the world premiere release of legendary composer John Barry's (GOLDFINGER, BODY HEAT, DANCES WITH WOLVES) original motion picture score to the Paramount Pictures 1977 feature film romance FIRST LOVE, starring William Katt, Susan Dey and John Heard, and directed by Joan Darling. Previously unavailable in any format, Barry's lush score is a revelatory find -- a masterful work of haunting beauty from one of filmdom's greatest composers. Much of this notable score has never been heard, as only a small portion of it was used in the finished film. Produced by Neil S. Bulk and Lukas Kendall and mastered by Mike Matessino, who mixed the score into full stereo from the original 16-track tapes, this special release is limited to 2000 units and includes in-depth, exclusive liner notes from film music writer, Jeff Bond, that take the listener behind the scenes of this remarkable “lost” score.

4/5... Ahh a boy meets girl story of love and the great John Barry brings us closer to that love some moving pieces and then some that getcha' going to a rough and tumble. Also who doesn't not have a crush on Susan Dey, still?
-Jeremy [Retro-Z]
Hosted by Unknown at 12:00 AM