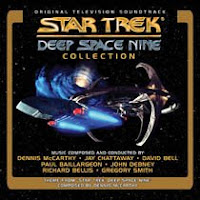 
La-La Land Records proudly announces its forthcoming release of STAR TREK:DEEP SPACE NINE COLLECTION, a limited edition 4-CD soundtrack set that showcases musical highlights from episode scores as heard in all seven original seasons of the beloved sci-fi television series STAR TREK: DEEP SPACE NINE (1993–1999). This special collection of music features more than five hours of incredible score, selected from some of the most acclaimed episodes of this enormously successful NEXT GENERATION spin-off.

5/5 across the board, this is the most wonderful tribute to a show that needed this kind of attention. I could go on and on how great this release, but if you are a fan of the show... you will be a happy to get the music/score to this as well.
-Jeremy [Retro-Z]

The operatic tons of these songs always impressed me.