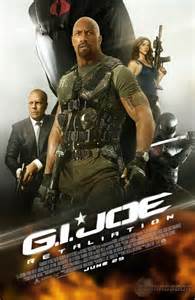 I know G.I. JOE: RETALIATION might be one of those movies I had low expectations for and when it exceeded those expectations I found myself giving it a possibly unearned good review.  Perhaps after a second viewing I will see the film's flaws and decide that the whole movie is sucktastic.  I don't think so though.  I think RETALIATION did some things right.  Things I didn't quite expect in this day and age where everything in movies has to be bigger and more explody than the last big movie.  There really isn't much for me to complain about.  I had a fun time watching the latest in the G.I. JOE franchise.  There is a good mix of live action realism with impossible over the top visuals expected from a cartoon.  It is better than what you would expect.  At least that is how it was for me.

RETALIATION has the luxury of not being hampered of going through the predictable motions of being an origin story.  We can move on and get into the movieverse where G.I. JOE is battling COBRA, a terrorist organization determined to rule the world if you didn't know.  I think the only bad thing about part 2 is that they give us a story that probably should have taken place in either the inevitable part 3 THE REVENGE OF COBRA or part 4 THE RETIREMENT OF COBRA.  It is too early to start our story by killing off all but four Joes.  Too soon I say.  Killing Duke off was a major mistake too but I will get to that later.  We never really get to know any of these characters and not too many of them return from part 1.  Where did they all go?  To the mall to buy shoes?  I guess the only good thing about their absence  is we don't have real life Jar-Jar Binks himself Marlon Wayans returning playing the ancestor of the thief character he played in the poopular DUNGEONS AND DRAGONS.  Maybe it would be worth it if he showed up and got all blowed up. Nah!  CLICK HERE TO READ THE REST...

I enjoyed the movie too. Marlon Wayans was an embarrassment in the first movie. I didn't miss him.