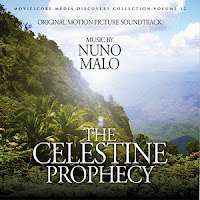 
The winner of the 2010 ‘Breakout Composer of the Year’ Award handed out by the International Film Music Critics Association, Portugues composer Nuno Malo’s first major feature film score here gets its world premiere on CD. Written for the film version of James Redfield’s best-selling novel, The Celestine Prophecy, the awe-inspiring score is written for orchestra and choir, and features an abundance of beautiful themes and set-pieces. Ethnical instrumentation gives the score interesting colors. It’s a score that will remind listeners of the most beautiful of James Horner’s scores (among the 22 tracks on the album, “Heaven” is an emotional knock-out!).

In the words of producer and screenplay author Barnet Bain, “through the gift of Nuno’s talent, we can close eyes and relive the spiritual adventure, discovering – and being discovered by – more of who we really are.” This is the 12th entry in MovieScore Media’s acclaimed ‘Discovery Collection’ which has included scores by such esteemed film composers as Basil Poledouris, Michael Kamen and Dario Marianelli.
5/5 I know I say this a lot of the times, but this is a beautiful score... beautiful! I am a fan of the hardcore action scores and always have a special place in my collection for this "EPIC" styled score... if you are reading this you need to hear/buy this music, period!
-Jeremy [Retro-Z]
Hosted by Unknown at 10:08 AM