Silva Screen Records: Doctor Who - The Caves of Androzani 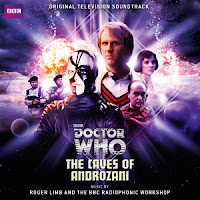 Doctor Who - The Caves of Androzani
Music by: Roger Limb


The first release of an archival Doctor Who soundtrack since the 2005 British TV comeback Featuring music by British electronic composer Roger Limb.

The Caves of Androzani was Roger Limb’s seventh of eight contributions to the series, and the first of his two very successful collaborations with director Graeme Harper. Broadcast in March 1984, the 4 episodes showed the regeneration of The Fifth Doctor (Peter Davison) into The Sixth Doctor (Colin Baker). In 2009 The Caves Of Androzani was voted the best in the history of the series by fans.

Roger Limb comments on working on The Caves of Androzani: “In 1984-5 we had new tools at our disposal including the Fairlight Computer Music Instrument (CMI) which I used to create the rhythmic percussion figures, and the wonderfully versatile Yamaha DX7 which was a landmark in the development of the synthesizer. I’d read the scripts but it was only when I saw the edited episodes on VHS that my ideas started to take shape. The greatest slice of luck was having Graeme Harper as director. He was able to explain exactly what he wanted from me, a great advantage!”

Roger Limb was part of the BBC Radiophonic Workshop team, which he joined in 1972. Perhaps best known for his work on Doctor Who, from 1981 to 1985, Limb composed the music for the The Keeper of Traken, Four to Doomsday, Black Orchid, Time-Flight, Arc of Infinity, Terminus, The Caves of Androzani and Revelation of the Daleks. In the 80s and 90s Limb has contributed music to a number of television series including The Justice Game, Aliens in the Family, Thinkabout, The Box of Delights, Kevin and Co, Martin Luther: Heretic, Storytime and the Look and Read. He is also known for the now cult "Swirley" tune, a happy piece of electronic music that was used as the theme to the BBC's Service Information news bulletins in the late 70s and early 80s.

5/5 I love anything that features the doctor, period!
-Jeremy [Retro-Z]
Hosted by Unknown at 12:30 AM

It's cool to hear his pop and jazz influence in there Jeremy.