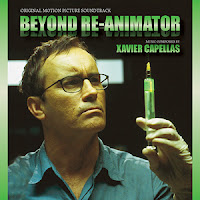 Beyond Re-Animator [2013]
Music by: Xavier Capellas


Celebrating the 10th anniversary of the 2003 cult movie Beyond Re-Animator, Screamworks Records releases the world premiere recording of Spanish composer Xavier Capellas’ exciting orchestral score for the film. The score follows in the tradition (and quotes the original Re-Animator theme) of Richard Band, giving the low-budget horror comedy a full-grown symphonic backdrop for the absurd on-screen action.

Adding a freshness to the old-fashioned orchestral writing, Capellas sometimes injectsmomentum and a modern influences through the means of drum loops, but the score is at heart an entertaining horror score that plays comedy straight and has a lot of orchestral suspense and action to offer.

5/5 Who doesn't love the music from this series of films, with it's edgy Psycho theme rip off to stepping out of the shadows as Xavier Capellas was able to do. Making it their own style giving us just right amount of jump and great themed memories.
-Jeremy [Retro-Z]