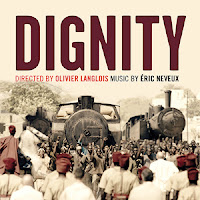 MovieScore Media has released two previous albums with French composer Eric Neveux – Hideaways (the fantasy drama by Agnès Merlet) and Flight of the Storks (the 2013 TV miniseries known as Le Vol des Cigognes in France). Neveux, who is also known for his scores for TV series Borgia and Un village francais as well as theatrical features Intimacy and Just Like a Woman, has written a strong orchestral score for Dignity, a television movie known in France as Les pirogues des hautes terres.

The historic film tells the story about rail workers strike in Senegal in 1947 that marked the start of the decolonization, a very dramatic event that gets an emotionally charged and musically interesting accompaniment by Eric Neveux. Orchestral colors are mixed with traditional African instrumentation.

5/5 It's a wonderful moving score to a show I have never had the pleasure to watch, the score from Eric Neveux brings a lot into a short package. I wish it was a bit longer as I found to enjoy it, it seemed to not a very long score...
-Jeremy [Retro-Z]
Hosted by Unknown at 12:20 PM