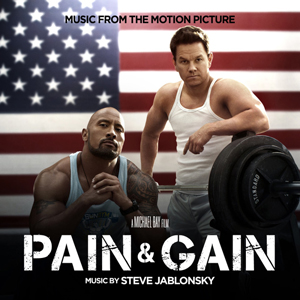 
Based on a true story, Pain & Gain follows a group of bodybuilders who engaged in a campaign of kidnapping, extortion and murder in Florida.  First told in an article from the Miami New Times, Pain & Gain is directed by Michael Bay and stars Mark Wahlberg and Dwayne "The Rock" Johnson.

Action veteran Steve Jablonsky, who provided the sonic adrenaline for the Transformers trilogy, reunites with Michael Bay for another full-throttle adventure.

5/5 I am a fan of Steve Jablonsky from his work with video games to blockbuster films, this is a interesting release, not the score... the scary muscle-sized title. I feel the need to bring out my muscle pants out of the closet and be first in line... yes I don't think so. All the elements are here and the score is another great release...
-Jeremy [Retro-Z]