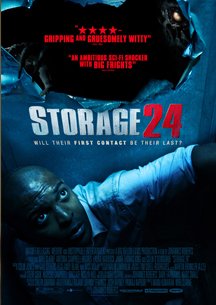 London is in chaos. A military cargo plane has crashed leaving its highly classified contents strewn across the city. Completely unaware London is in lockdown, Charlie (Noel Clarke) and Shelley (Antonia Campbell-Hughes), accompanied by best friends Mark (Colin O’Donoghue) and Nikki (Laura Haddock), are at Storage 24 dividing up their possessions after a recent break-up. Suddenly, the power goes off. Trapped in a dark maze of endless corridors, a mystery predator is hunting them one by one. In a place designed to keep things in, how do you get out?
3/5 I never understand how movies get made, here you have a pretty decent idea for a film and some decided instead of making it good... we will make it fit "what the audience wants". You have a group that all seem to know each other in a way, that is the subplot and a few weirdos who lurk in the background. Some how they all end up in one place, one place where at some point you are rooting for the monster. Which I felt had the best role in the entire film, not saying it was bad... I enjoyed it, just guessing who was next and why were these jack-nuts wonder around this storage unit looking for something that would be better found outside. I did find the ending very good, but it took a time to get there.
-Jeremy [Retro-Z]