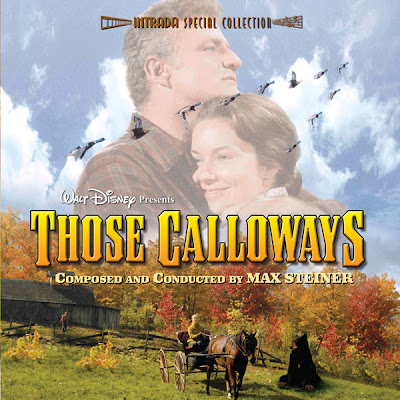 Walt Disney's: THOSE CALLOWAYS
Composed and Conducted by MAX STEINER
INTRADA Special Collection Vol. 238
-------------------
Max Steiner’s score for Those Calloways is old-fashioned in the best sense of the term. It is unashamedly symphonic—in an era that saw composers like Lalo Schifrin, Henry Mancini and others continue to move film music away from the purely symphonic model. Steiner uses several themes as leitmotifs throughout the film, developing them with well-honed craft and technique in an art form that he himself more or less created. For the geese, the balletic beauty of their flight and their unfettered freedom are musically reflected in a waltz. Open-hearted and embracing, the theme accompanies many magnificent long shots of the birds soaring across the New England sky, occasionally arrange in more gentle orchestral settings—such as those featuring solo cello and English horn. Steiner’s theme for the Calloways is equally forthright. Introduced in the main title, it is masculine but gentle.

For one of his final feature film scores, Max Steiner created over an hour’s worth of rich, warmly American music. For this premiere release of the soundtrack, featuring every note of music Steiner recorded for the film, Intrada was given access to the complete recording session elements, originally made on multi-channel 35mm magnetic film and later transferred intact onto 2″ analog tape. Still later, these elements were transferred into digital formats to be vaulted alongside the other audio elements of the picture. Thanks to Disney’s legendary reputation for preserving their elements with care, every channel for every cue, including overdubs for the two rousing songs written by Richard M. and Robert B. Sherman, survived in beautiful condition. Though the film itself was presented in mono only, having the original multi-track elements made it possible for us to prepare new two-track stereo mixes of every cue.  This beautiful new release also marks Max Steiner's premiere appearance on the Intrada label.

Cam Calloway (Brian Keith) is a man with a mission. He dreams of creating a sanctuary for the geese that fly over his cabin near Swiftwater, Vermont, each fall. His teenaged son shares his ideals, but his long-suffering wife (Vera Miles) just wants to eke out a better existence from their fur-trapping exploits. The citizens of Swiftwater look on “those crazy Calloways” as outsiders. A slick-talking salesman wants to sell them a scheme that would turn their quaint New England village into a hunters’ paradise. This conflict between exploitation and conservation forms the crux of the drama in Walt Disney’s Those Calloways (1965).