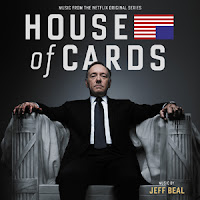 
Ruthless and cunning, Congressman Francis Underwood (Oscar® winner Kevin Spacey) and his wife Claire (Robin Wright) stop at nothing to conquer everything.  This wicked political drama penetrates the shadowy world of greed, sex, and corruption in modern D.C.  Kate Mara (American Horror Story) and Corey Stoll (Midnight in Paris) costar in the first original series from David Fincher (The Social Network) and Beau Willimon (The Ides of March).

5/5 I haven't seen this on Netflix Series as maybe you have, I am covering the score... I am a fan of Jeff Beal's work and this he continues to move us along with each track.
-Jeremy [Retro-Z]
Hosted by Unknown at 12:30 AM

Dude, you need to watch it. Excellent show!