Magnolia Pictures: AT THE GATE OF THE GHOST 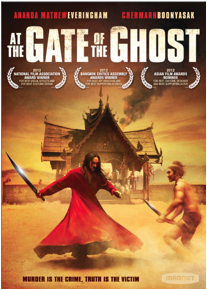 AT THE GATE OF THE GHOST

An Adaptation of the Academy Award® Nominated Film, Rashomon From the Executive Producer of Ong Bak 2, Chocolate, The Bodyguard 2 and Dynamite Warrior.

In this adaptation of the Japanese film Rashomon, a young monk leaves town to seek his father’s counsel after being disturbed by the murder trial testimony of the bandit Singh Khan, the wife of the deceased warlord, and a shaman who conjures up the warlord’s spirit. Along the way, he encounters a poor man who testified at the trial, and the two take refuge in an abandoned burial tunnel during a storm. They are met by an old beggar who joins in their lively conversation about the trial. In vivid detail, each story is witnessed on screen as it’s told from the bandit’s, the wife’s and the warlord’s perspectives, all riddled with bias and personal agenda. In the end, the young monk is left to determine what meaning is of true consequence not only in this murder trial, but in choosing to continue on his monastic path.