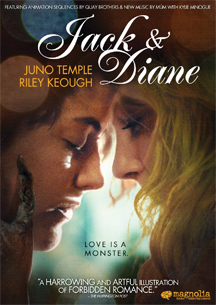 Jack and Diane, two teenage girls, meet on a summer day in New York City and spend the night kissing ferociously. Bubbly and naïve, Diane’s charming innocence quickly begins to open tomboy Jack’s tough skinned heart. But when Jack discovers that Diane is moving at the end of the summer, she pushes her away. Diane is overwhelmed by her powerful new feelings, and they begin to manifest themselves in terrifying ways, causing unexplainable violent changes to her body. Young love is a monster – can Jack and Diane survive?

My focus in making JACK & DIANE is to carefully examine what happens when two young people fall in love for the first time. I want to show this love in a way that comes from inside the characters.

Diane is quiet and innocent with an inner raging passion. Jack is a tough skinned skateboard girl who hides a fragile heart. The collision of these distinct personalities creates a vulnerable energy. When Diane first discovers love she becomes desperate to find out if her feelings are being returned. Only Diane can't find the words to explain how she feels. Instead, her head gets fuzzy, she gets scared, she panics... and she transforms into a horrifically violent creature covered in blood. This creature, though it is grotesque, becomes Diane’s way of saying, "I love you so much I want to eat you and put you inside me forever."

In this way, certain parts of the film expand into dreamlike and often terrifying imagery. I see these moments as a manifestation of Diane’s inner desire for love and acceptance. It is not until Jack also takes on these unusual transformations that she can understand how Diane feels and the two can finally unite their souls. For me this process a way of visualizing what love really feels like when you first experience it. I believe love is scary, all consuming, it makes you vulnerable, and it's the most important thing to happen to anyone in their life. To show that Diane and Jack carry these elements of love together is why we want to make this film.

4/5 It's not what you might think, with many interesting turns... here at the wolf we like this kind of artsy mess. I mean that in a good way, you will scratch your head... but truth be said "It's a monster, wrapped around being young"... and yes I didn't tell you anything or did I?
-Jeremy [Retro-Z]
Hosted by Unknown at 12:30 AM