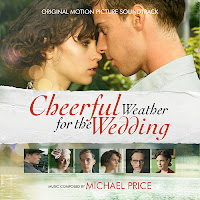 Starring Downton Abbey star Elizabeth McGovern and up and coming star Felicity Jones, director Donald Rice's Cheerful Weather for the Wedding is a British romantic comedy about a young woman who gets cold feet on her wedding day, fearful she's about to marry the wrong man. The wonderful orchestral score for the film is composed by Michael Price, who co-wrote the highly popular Sherlock TV music with David Arnold and worked on many of his scores. Price has an impressive background as a music editor on the Lord of the Rings movies, Children of Menand Love Actually, and started out in the film music business as a music co-producer for the legendary Michael Kamen on scores such as X-Men, The Iron Giant and Event Horizon. His score for Cheerful Weather for the Wedding is delightful and very romantic, sometimes playful and, perfectly capturing the film title: cheerful! Our album also features two folk music tracks featuring Panjandrum.