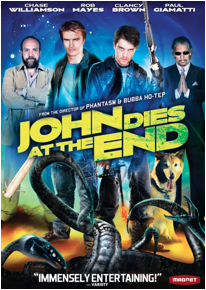 In JOHN DIES AT THE END, it’s all about the Soy Sauce, a drug that promises an out-of-body experience with each hit. Users drift across time and dimensions. But some who come back are no longer human. Suddenly a silent otherworldly invasion is underway, and mankind needs a hero. What it gets instead is John (Rob Mayes) and David (Chase Williamson), a pair of college dropouts who can barely hold down jobs...

I still want to see this one!