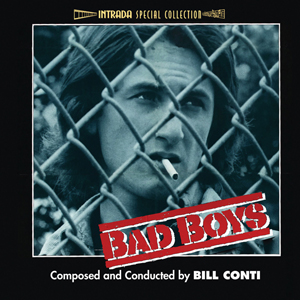 
Despite the brutal violence of the major set-pieces in the 1983 film Bad Boys starring Sean Penn (as Mick), composer Bill Conti took pains to emphasize the film’s humane side in his score, building around a gentle main theme that serves as the love theme and as a musical reflection of Mick’s humanity as well as his potential for redemption. There are four facets to the score, of which the largest in impact is the austere, clinical sound of high woodwind harmonies, dominated by clarinet choir. A second orchestral device features piano and strings playing the warm and tender love theme. The third features suspense and dramatic action material, while the fourth layer of music is that of Chicago and her streets at night where the story begins. Conti scores for full orchestra, but primarily uses strings, piano and percussion for the love theme, woodwinds for the correctional facility, and strings, woodwinds and French horn for the action. He reserves full brass for his sizzling source music. When heard as one lengthy work, the shades of excitement, color, subtlety and drama are impressive.

Michael “Mick” O’Brien is introduced when he smashes a terrified woman’s car window to steal her purse. The only positive thing in Mick’s young life is his girlfriend JC.  Mick and his friend Carl plot to rip off Paco, a drug-dealing fellow student, but the caper ends tragically—Carl is killed, and Mick accidentally runs over Paco’s eight-year-old brother. Mick is sentenced to a correctional facility where the brutal inmate “barn bosses” really run the place. Mick uses violent means to become the new barn boss, but the grieving Paco plots his revenge, beating, raping and nearly murdering JC. Paco is arrested and sent to the same facility, where the other inmates bet on who will survive the inevitable confrontation.