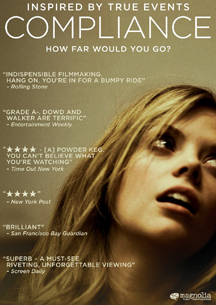 When a police officer tells you to do something, you do it. Right?

Based on true events, COMPLIANCE tells the chilling story of just how far one might go to obey a figure of authority. On a particularly busy day at a suburban Ohio fast food joint, high-strung manager Sandra (Ann Dowd (Garden State) receives a phone call from a police officer saying that an employee, a pretty young blonde named Becky (newcomer Dreama Walker) has stolen money from a customer. Convinced she's only doing what's right, Sandra commences the investigation, following step-by-step instructions from the officer at the other end of the line, no matter how invasive they become. As we watch, we ask ourselves two questions: “Why don’t they just say no?” and the more troubling, "Am I certain I wouldn't do the same?"

The second feature from director Craig Zobel (the man behind the 2007 Sundance hit Great World of Sound), COMPLIANCE recounts this riveting nightmare in which the line between legality and reason is hauntingly blurred. The cast delivers startlingly authentic performances that make the appalling events unfolding onscreen all the more difficult to watch – but impossible to turn away from. Delving into the complex psychology of this real-life story, COMPLIANCE proves that sometimes truth really is stranger than fiction.

5/5 I have some mixed feelings about this film, I just want to say... that is enough, how far can you really go, I have rights too. It was a great bunch of actors and compelling art-house film... I just want to look away. This is based off true events... we have lost control.
-Jeremy [Retro-Z]