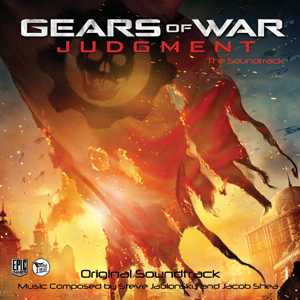 
New York, Feb. 19, 2013 - Sumthing Else Music Works, through its licensing relationship with Epic Games Inc., proudly presents GEARS OF WAR®: JUDGMENT - THE SOUNDTRACK. Developed exclusively for Xbox 360 by Epic Games and People Can Fly, GEARS OF WAR: JUDGMENT brings players back to the terrifying aftermath of Emergence-Day, before the events of the Gears of War trilogy, for the most intense and challenging Gears of War game yet. GEARS OF WAR: JUDGMENT - THE SOUNDTRACK, featuring original music composed by Steve Jablonsky (Gears of War 3, Gears of War 2, Transformers movie trilogy) and Jacob Shea (Gears of War 3, Crysis 2, Prince of Persia: The Forgotten Sands), will be available on March 19 at retail outlets worldwide through Sumthing Else Music Works www.sumthing.com, and for digital download at Amazon MP3, iTunes and other digital music sites.

Set years before the events of the previous Gears of War trilogy, JUDGMENT centers on Kilo Squad, a troop of soldiers led by Damon Baird and Augustus "The Cole Train" Cole. They are joined by newcomers to the Gears of War series, Sofia Hendrick and Garron Paduk, as they attempt to save the besieged city of Halvo Bay from a terrifying new enemy. GEARS OF WAR: JUDGMENT depicts the planet Sera on the brink of annihilation by an unstoppable new Locust menace, giving players a new vantage point into one of the richest and most acclaimed sagas in gaming.

Steve Jablonsky has returned to provide another compelling score for the Gears of War universe. Familiar Gears of War themes return alongside new works that reflect the desperate fight of the COG forces in the first days after the Locust Emergence, as Kilo squad makes a name for itself battling a new and unconventional threat. Imbued with a fresh sense of intensity and heavy energy, the GEARS OF WAR: JUDGMENT soundtrack reflects the new peril facing the world of Sera.

The Gears of War series is one of the most popular franchises in Xbox history, having sold more than 19 million copies worldwide, and spawning New York Times best-selling novels, toys, collectibles, graphic novels, and soundtrack albums. GEARS OF WAR: JUDGMENT will launch on March 19, 2013. For more information, visit: www.gearsofwar.com.