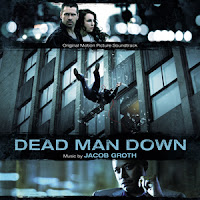 
Niels Arden Oplev, the acclaimed director of the original The Girl With The Dragon Tattoo, makes his American theatrical debut with the new action thriller, Dead Man Down.  Colin Farrell and Noomi Rapace star as two strangers who are irresistibly drawn to one another by their mutual desire for revenge, which triggers an escalating trail of mayhem.  The film co-stars Academy Award® nominee Terrence Howard and Dominic Cooper, from a screenplay by J.H.Wyman (Fringe).

5/5 This is one of those films that bring many talented people into one place and the score is no different Jacob Groth "The Girl With The Dragon Tattoo Trilogy" brings you into the story and keeps us there.
-Jeremy [Retro-Z]
Hosted by Unknown at 12:00 AM