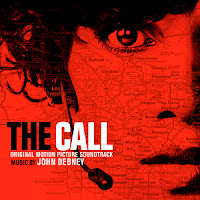 
When veteran 911 operator, Jordan (Halle Berry), takes a life-altering call from a teenage girl (Abigail Breslin) who has just been abducted, she realizes that she must confront a killer from her past in order to save the girl's life.

“There is a central emotional theme of sorts which highlights the emotional arc between Halle and Abigail. The theme or string motif presents itself about 3 times in the film,” described Debney.  “I wanted to create an overall soundscape however. One at once disturbing and unsettling. Harsh and jarring. Animalistic and suspenseful. That is how I would best describe the approach.”
5/5 Here is one of those things I have to choose from the trailer that I see and the score I am listening to, sometimes I try to give you a little about both just so you know. I know that Debney's work is great as always he brings emotion into each track building the ideas of suspense and intrigue. He takes a turn with his normal style and gives us "disturbing" and he does... you will be disturbed.
-Jeremy [Retro-Z]
Hosted by Unknown at 2:00 AM

The previews for this movie definitely have me intrigued. I'll probably end up seeing it.