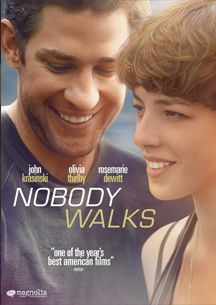 Martine (Oliva Thirlby), an artist from New York, arrives in Los Angeles to work on her film.  She is staying with friends of a friend, Julie (Rosemarie DeWitt), her husband Peter (John Krasinski), Julie's teenage daughter Kolt (India Ennenga), and their young son.  From the day that Martine walks into the lives of this open-minded, relaxed California family, everything is subtly set off balance. Peter is helping Martine complete the sound design on her art film and they collaborate closely together, working in the studio off the pool house where Martine is staying.  They develop a connection that is rare for Peter and necessary for Martine to finish her movie but, which begins to veer away from professional terrain.  An attraction is also brewing between Martine and David's assistant (Rhys Wakefield), who’s sixteen-year-old Kolt is crushing on as well.  Meanwhile, Julie, a therapist who prides herself on being professional and together, is fending off the projective impulses of one of her patients (Justin Kirk), a screenwriter who can talk his way into anything.   Each character in Nobody Walks experiences a surge of desire catalyzed by Martine’s arrival, and everyone is forced to confront the new landscape that emerges in her wake.

With Nobody Walks, I wanted to explore a functional family at a turning point, to examine the decisions people make and the moral choices they must confront.  The parents are in a rut, vaguely losing touch with each other, not having sex, the way many couples get while busy with work and kids and life.  Martine’s presence crystallizes their distance and leads them to acts of betrayal.  Adrift this sea is their teenage daughter Kolt, who is at a time in her life when she is beginning to test the boundaries of her own sexuality. In writing the script, Lena Dunham and I were careful not to make the film a heavy-handed morality tale, with someone floating dead in the pool at the end to pay for the sins of the family.  We wanted to examine how people in loving relationships justify hurtful actions.  Families go through rough times and compromise their trust in one another, and then life goes on, but nobody walks away unscathed.

4/5 I thought it was going to be something different, I enjoy the actors it was shot wonderfully... I just found myself wanting something, waiting for it to say something... I don't think it ever did.
-Jeremy [Retro-Z]