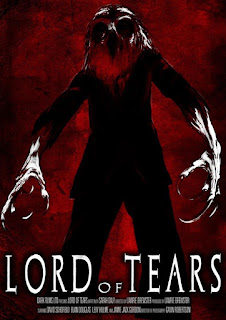 Lawrie Brewster the director of LORD OF TEARS has contacted me and asked to help spread the word on his film and it's Kickstarter page.  What is really interesting is that the film is done and they are looking to raise funds to promote the film.  I am a big movie geek and it is a complete thrill to help out film makers get their films made or promoted.  It looks like you can order the film by pledging to the Kickstarter campaign.  LORD OF TEARS looks incredible.  It looks beautiful and dark with a haunting atmosphere complete with what I think will be a visually iconic villain, the Owlman.  I want to know more about this Owlman.  The movie trailer reminded me of the Hammer films from the sixties which are my favorite kind of horror films.  I do recommend watching the trailer and while you are on the Kickstarter page be sure to watch the video of the director explaining what LORD OF TEARS is about and the talent that went into making the film.  Notice that the director talks about how the movie focuses on character, story and atmosphere.  How refreshing.  Nowadays it is about gimmicks, jump scares and gore.  Oh, and let us not forget about the endless bombardment of remakes.

It is important to support independent horror.  There are a lot creative minds out there that offer new and bold ideas that maybe overlooked by big cowardly studios that view movies as nothing more than something to make a buck.  Film is art and we need to support film makers that are artists and not just makers of long commercials.  I believe that Lawrie Brewster is such an artist.  He has created a horror film that is about imagination and fantasy.  I am going to help get this film out there.  If you are a fan of horror why not do the same?  Click on the link below and give a little.  I did.  Helping makes you feel all warm and fuzzy in your inside parts.  Its neat.  I just hope I don't ever see the Owlman in my dreams.

CLICK HERE TO GO TO LORD OF TEARS KICKSTARTER PAGE.