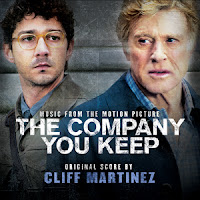 
Based on the 2003 novel by Neil Gordon, The Company You Keep stars Robert Redford as Jim Grant, a civil rights lawyer and single father who must go on the run when a brash young reporter (Shia LaBeouf), exposes his true identity as a former 1970s radical fugitive wanted for murder.  Sparking a nationwide manhunt, Grant sets off on a cross-country journey to clear his name.  The ensemble cast features Susan Sarandon, Nick Nolte, Chris Cooper, Stanley Tucci, Terrence Howard, Julie Christie, Brit Marling and Anna Kendrick.


5/5 I am a fan of everything about this film from it's director, actors... to the riviting score by Cliff Martinez
-Jeremy [Retro-Z]