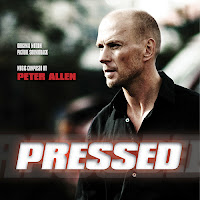 Pressed is a gritty urban soundtrack in the vein of Crash and Drive, featuring original songs by David Steele and other artists, plus a dark and mesmerizing score by Canadian composer Peter Allen (winner of the Leo Award for his Flower & Garnet and Gemini Award nominee for The Score) who is also currently enjoying success with his score for the indie horror hit American Mary. Starring Luke Goss, currently seen in the ABC show Red Widow, and directed by Justin Donnelly, Pressed tells the story about a drug deal going wrong putting the main character in a desperate situation, and the intensity of the drama and the contemporary setting of the story is effectively portrayed in the soundtrack.

5/5 It's got a great vibe from song to score... I have been looking forward to this release, here it is! Can you dig it!
-Jeremy [Retro-Z]