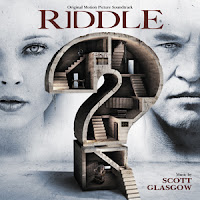 
College student Holly Teller (Elisabeth Harnois) is drawn to the mysterious small town of Riddle, Pennsylvania in search of her missing brother. Against the will of the local Sheriff (Val Kilmer) and town elder (William Sadler), she begins to unravel a mystery connected to an abandoned psychiatric hospital on the edge of town, uncovering a terrifying past the town is determined to keep hidden.

5/5 This was a great score by Scott Glasgow and it is limited release from Varese, I love and hate when they release great stuff to a limited release. I don't know anything about the film so I thought I would share the trailer, let's watch together... it appears to be a charged drama with Val Kilmer riding the lead. Needless to say the score might be one of the many plus things to this film, so why don't you click on over and Riddle me this...
-Jeremy [Retro-Z]