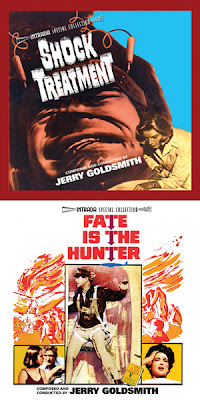 For Shock Treatment, where an actor is hired to commit himself to a gruesome insane asylum in an attempt to discover where another inmate secreted a fortune, producer Aaron Rosenberg encouraged Jerry Goldsmith to go wild.  And wild he went, using techniques that would later be drawn on for his groundbreaking score for Planet of the Apes.  In Shock Treatment Goldsmith used the esoteric instrumentation that would mark so many of his later scores, but he also experimented with recording effects of a kind that few other composers of this era would have dared to attempt, including the speeding up and/or reversing piano phrases.

Fate Is the Hunter, on the other hand, provides another musical terrain entirely. This is Jerry Goldsmith in classic symphonic mode, supporting a far more traditional film. The composer’s contribution here is spare: less than 30 minutes of music, mostly consisting of variations the main title.  This is one of Goldsmith’s loveliest themes: searching and magical. “Moon Fish” and “Forest Scene” are two cues that move the audience from the difficult present to the idealized past via a single character.  Such is the genius of Jerry Goldsmith on display, early in his career. Brief, but impactful.

This release offers music that, a mere decade ago, would have been impossible to present on CD. Thanks to new technology, restoration specialist Mike Matessino, producer Nick Redman, and executive producer Douglass Fake have been able to offer this extraordinary disc in stereo for the first time, re-syncing and conforming each individual track to bring us the premiere release of these scores in expanded format.