TOTAL RECALL: Not a movie but an expensive looking platform jumper. 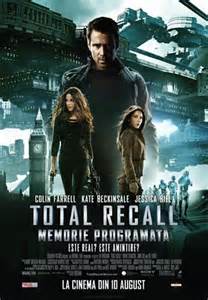 The new TOTAL RECALL isn't the worst remake in the world.  It has some truly great special effects.  Just look at the robot stormtroopers that are no doubt C.G.I. but look incredibly real like the T-Rex from JURASSIC PARK.  Whats-her-face from the UNDERWORLD movies is an excellent bad guy.  Nothing stops her from getting the job done.  It is total badass to see her intensity as she tries to capture/kill Quaid.  Colin Farrell isn't bad in the film.  He is there doing stuff, I suppose.  The problem is that no matter what TOTAL RECALL sparkles and dangles in front of the viewer's eyes it can't help but make you feel like this whole movie is completely unnecessary.  This movie has already been made and it was called TOTAL RECALL and it was done better.

So the first thing the new TOTAL RECALL does wrong is completely throw out the mystery as to whether Colin's character, Quaid  was an agent working for the resistance or just some normal guy living the implanted fantasy from the company Rekall that puts exciting vacations into your mind.  They flat out show you that Quaid is captured while trying to escape with Jessica Beil in the opening scene!  Remember in the original TOTAL RECALL where Arnold is on the mountain on Mars with the pretty lady and he falls and his space suit helmet breaks and his face gets all contorted and gross?  Those were good times.  He wakes up realizing he just had a nightmare.  When you immediately see that his wife is not the same woman in the dream you become suspicious as to maybe there was some truth to that nightmare.  This opening scene lays the foundation for the later scene when that small guy from Recall (I think that is how it was spelled in the original movie) shows up and tells Schwartzen-Quaid that it was all just an implanted dream.  For a moment not only does Schwartzen-Quaid start to believe it but you as the audience member does too.  But then Schwartzen-Quaid sees the sweat going down the small guys face and its Good-Bye to that guy!  The new TOTAL RECALL begrudgingly takes time away from the "amazing" PG-13 jumping action to have the same scene.  This time however the moment is nowhere near as badass or intense as the original.  That is because we already know that Quaid is a resistance fighter or agent or whatever he is from the first freaking scene of the movie.  Way to go, Len Weisman.  We don't need a big exciting slick chase scene to get the audience entertained.  We need the audience invested into the story based on the mystery as to who Quaid is and how he is involved in the events around him. CLICK HERE TO CONTINUE READING....

We finally saw this one last week and I totally agree. It seems they threw the story out the window and just relied on cool CGI. The original was much better.

So funny, we literally just watched this last night! I've been putting it off for so long because I love the original. I hated the plot of this one and no MARS and no Kuato! I missed the martians and the good plot to save the air. The only thing I really liked in the new one was Colin Farrell didn't do half as bad as I thought he would, he was actually really great! If only they could have replaced the original with him instead of Arnold (who yes is hilarious in it, but we all know is a horrible actor) it would have made it an all time best!