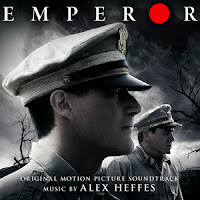 
As General Douglas MacArthur suddenly finds himself the de facto ruler of a foreign nation, he assigns an expert in Japanese culture, General Bonner Fellers, to covertly investigate the looming question hanging over the country: should the Japanese Emperor, worshiped by his people but accused of war crimes, be punished or saved?

5/5 it is an epic score brilliantly mastered by Heffes and I believe it to be my second favorite score of the year... will someone keep record of my favorites I have so many.
-Jeremy [Retro-Z]