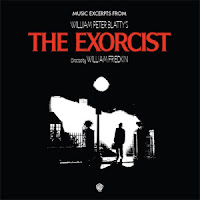 
Back in 1973, not only was this film released during the Christmas holiday season, it freaked out audiences like nothing that came before (well, maybe Night of the Living Dead!). For many audiences seeing Linda Blair make obscene gestures to Father Karras and puking green stuff, it was a shock and something not seen that often in movies around that time. One thing everybody remembers about the film is Mike Oldfield's Tubular Bells. Also featured on the soundtrack are classical pieces by Krysztof Penderecki, Anton Webern and Hans Werner Henze.

5/5 One of the scariest films to date and that damn theme rolling inside your head and this is the craziest soundtrack that I am proud to have in my collection. This score used to be one of the more difficult ones to get, but now here it is... so go get it.
-Jeremy [Retro-Z]
Hosted by Unknown at 12:30 AM

I won't be able to sleep any more thanks to those eyes.....