BuySoundtrax Records is proud to announce the release of two new recordings on Film Music For a New Age Vol. 1 and Cinema Classics for Solo Piano (performed by Mark Northam). 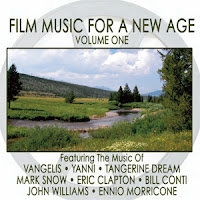 Film Music For a New Age Vol. 1 is the first in an upcoming series of newly recorded/arranged versions of themes that are new age-influenced from films including Avatar, Class of the Titans, Legend, and Star Trek Generations. 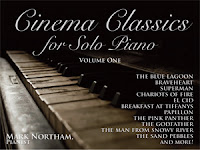 Cinema Classics for Solo Piano is a stripped down arrangement of classic film themes as performed by Mark Northam.  Performing these themes for solo piano really lets the melodies shine and spotlights the genius of such composers as Jerry Goldsmith, James Horner, Dave Grusin, Nino Rota and John Williams.

4/5 and 4/5 I prefer the originals to the scores I get, though it is nice once in awhile to get some great interpretations of a mix in one place. These sounds-capes bring us a aspect of sharing not only the talent of artist you know and ones you should like "Mark Northam".
-Jeremy [Retro-Z]
Hosted by Unknown at 12:00 AM