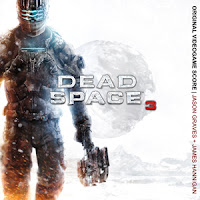 Dead Space Composer Jason Graves is joined by James Hannigan on the third episode in the series. Graves and Hannigan last collaborated on ‘Command and Conquer – Tiberian Twilight’ in 2010 and have joined forces again to bring their unique talents to bear on this wide ranging score. As the story and the universe of Dead Space have evolved, so has the music. Dead Space 3 delivers the gamut of emotions from those familiar chilling creepy sounds introduced in Dead Space 1, to elated moments, tear jerking moments and memorable epic themes. On his journey through the game, Isaac is accompanied by a team of other characters including Ellie Langford, John Carver, Austin Buckell, Jennifer Santos and Robert Norton. The relationships between these characters are underscored by a web of melodies that will echo around your head long after you have put your controller down!

5/5 I have been introduced to Jason Graves work recently not that I have not heard of him, just didn't know how much I would enjoy his style. I am now a fan and will be bring you more about his work...
-Jeremy [Retro-Z]
Update: TOMB RAIDER COMPOSER JASON GRAVES TO SPEAK AT PAX EAST PANEL: "BEHIND THE MUSIC OF BLOCKBUSTER VIDEO GAMES"
FOR MORE DETAILS [CLICK HERE]
PAX Naga Theatre, Boston
Saturday, March 23rd
2.30pm - 3.30pm
Hosted by Unknown at 12:30 AM