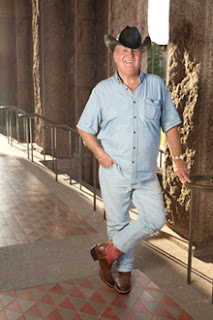 Notable soundtrack composer Michael J Lewis turns his hand to filmmaking. He takes a few moments to tell us more about his new short film, CHISOS.


Given your vast experience as a film composer, what led you to move into film-making? Was this project something you've always wanted to do for a long time, or was this come about as more of an epiphany (or a bit of both)?

Michael J Lewis: CHISOS has been fermenting for a long time. Last summer I saw a stunning 60sec European TV commercial that had not a single word. It was fabulous. It worked wonderfully, and got a lot of attention. That was the trigger. Through the years I would say to myself “one day”. Well, the day has come. I immediately set out to make my own film without words, CHISOS.

A "film without words"?

Michael J Lewis: For years I have asked myself why music should invariably take second or third place in the mix. I cannot tell you how many times I have heard critics and fans say, “The music was the best thing about the film.” Most films, of course, need dialogue to tell the story, and music is used to enhance the emotion behind those words. Shakespeare is words. Chekov is words. Words are primary, and music is secondary. I have been to hundreds, maybe thousands of mixes, when directors and producers have screamed at the mixer to "keep that (expletive) music down; we can’t hear the (expletive) words." It’s a constant conflict. Then you add in the sound effects. Down goes the music to an even lower level.

Was there an artistic impetus behind telling a story visually, but without dialogue?

Michael J Lewis: I wrote a "film score" before the film, then allowed the music to generate the story and here we are: trying to raise the money to make a movie without words, but by no means a silent film. A director sent me his action reel the other day. It was spectacular. Great action, great music: a knockout. Then I realized that there was not a single word and not a single sound effect in the entire presentation. It was highly effective.

Can you tell us about the story of CHISOS - as much as you can?

Michael J Lewis: I am very reluctant to talk about the story in much detail because the story keeps surprising, and to talk about it would give away a lot of the plot twists and turns. The log line really says it all. “An Hispanic teenager (protagonist) confronts a tragic past in the desert lands of West Texas, only to find true beauty.”

Sounds like it will be very powerful.
Koyaanisqatsi was an entire film without dialogue, only music, and it worked very well.