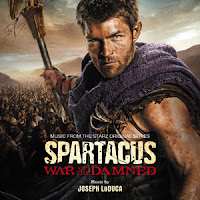 
Gaius Claudius Glaber is dead. The rebellion has swelled to thousands of freed slaves, and Spartacus is determined to bring down the Roman Republic.  Following Ashur’s death, Naevia and Crixus fight as one. Together with Gannicus and Agron, they prepare for war with Rome.  The Roman Senate turns to Marcus Crassus, a wealthy, strategic politician, for aid. With a young Julius Caesar as an ally, Crassus must crush the rebellion.

5/5 I have always been a fan of Joseph LoDuca in this series known as "Spartacus" and he is able to capture the true essence of this time period. Though it has the series never has captured the soul when it's lead actor Andy Whitfield sadly passed away... Though for the music it does keep the spirit strong and I thank LoDuca for that.
-Jeremy [Retro-Z]
Hosted by Unknown at 1:00 AM

loved the music in the show! Amazing scores!
And I will forever shed tears after Glaber.... he was ever so dear to me....