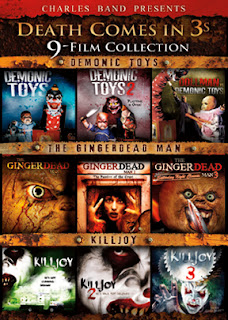 
In nine outrageous horror films, crazy killers—toys, cookies and clowns—come to life! With installments from the Demonic Toys, Gingerdead Man and Killjoy series', this collection proves that death comes in threes…and it's always messy.

DEMONIC TOYS - A botched bust on a pair of arms dealers inadvertently leads to the awakening of a demon with the power to bring toys to life as his personal minions. DEMONIC TOYS 2 - When an oddball group of characters gather to inspect an ancient puppet, strange things begin to happen. DOLLMAN VS. DEMONIC TOYS - Officer Judith Gray seeks the help of miniature-sized cop, Brick Bardo, and his equally small girlfriend, Nurse Ginger, when she runs into trouble with the evil Toys.

KILLJOY - When an outcast is bullied to death, a killer clown exacts revenge in his honor. His name is Killjoy and he thinks murder is a laughing matter. KILLJOY 2 - On a wilderness rehabilitation trip, a group of at-risk youth find themselves in the home of a voodoo woman where Killjoy's spirit is summoned. KILLJOY 3 - A group of unsuspecting college students accidentally open the portal to Killjoy's demon realm and get trapped in a strange funhouse world with the killer clown and his friends.


Okay we all love the films from Full Moon Entertainment and crazy mind of Charles Band... which most of these films come from. You want to be freaked out for an afternoon, well here you can... in these films and their sequels... the best thing that Echo Bridge did was to throw out those damn double sided dvd and made it 6 on one and 3 on the other... bad was never this good!
-Jeremy [Retro-Z]