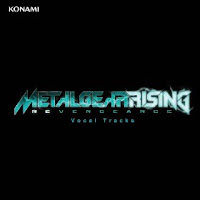 
ABOUT: METAL GEAR RISING: REVENGEANCE
Metal Gear Rising: Revengeance takes the renowned METAL GEAR franchise into exciting new territory by focusing on delivering an all-new action experience unlike anything that has come before.. Combining world-class development teams at Kojima Productions and PlatinumGames, MGR:R brings two of the world's most respected teams together with a common goal of providing players with a fresh synergetic experience that combines the best elements of pure action and epic storytelling, all within the expansive MG universe. The game introduces Raiden as the central character; a child soldier transformed into a half-man, half-machine cyborg ninja, equipped with a high-frequency katana blade and a soul fueled by revenge.

5/5 Do you love video games, were you aware that scores to some of your greatest games have accompanying soundtracks? This one does in fact it has two... one for the score and with bands which include: Howard Jones (Killswitch Engage), Nita Strauss (Guitarist for Iron Maidens) and many of the performers from the game (including Bush, Yen, and Dominguez). All handpicked by Jamie Christopherson to bring your experience alive...