GORILLA INTERRUPTED is a different kind of good! 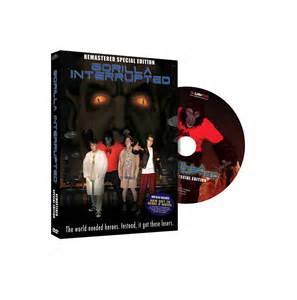 Let me just start off by stating that I am a huge fan the guys over at RedletterMedia.com.  I love their review shows HALF IN THE BAG, BEST OF THE WORST and the extremely insightful/hilarious PLINKETT REVIEWS.  The shows' creators Mike Stoklasa, Jay Bauman, and Rich Evans are three talented and funny individuals that bring something a little different to the Internet with their web series.  They have a bunch of short films on their website and occasionally put out a movie now and then.  I highly recommend FEEDING FRENZY.  They have been gracious enough to release their first movie they made back in the day called GORILLA INTERRUPTED.

GORILLA INTERRUPTED is about Ray Grabowski, a man who is turned into a gorilla by aliens.  With the help of his kind-of-sort-of friends Dex, Sid and Jar Jar Binks the four yahoos stop an alien invasion and fight the Devil for some reason.  It has "shot in the backyard with dad's camera" production values but the film has this strange crude energy that you don't get too often in comedies.   I was reminded of the show THE YOUNG ONES which I was excited to hear them mention on the commentary track. The story is strange and the humor is absurd but there are genuine moments of greatness that hint at the greater things that came afterward.  Click here to read the rest....

Those guys are pure genius. When I heard they were expanding past the Mr. Plinkett videos I thought it would never work, but they built a strong brand.

I try to help them out whenever I can. Thanks for the comments!