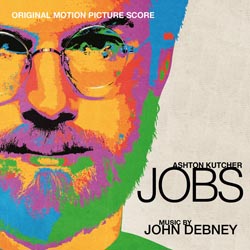 
La-La Land Records presents the original motion picture score to the new feature film JOBS, starring Ashton Kutcher, Josh Gad and Dermot Mulroney, and directed by Joshua Michael Stern. Acclaimed composer John Debney (THE PASSION OF THE CHRIST, SIN CITY, THE ANT BULLY, IRON MAN 2) expertly weaves an evocative blend of musical styles (classical, rock, orchestral, electronic) to buoy this emotionally-charged telling of Steve Jobs fascinating and moving journey from college dropout to one of the most revered entrepreneurs of the 20th century. Produced by John Debney, Mason Cooper, MV Gerhard and Dan Goldwasser and mastered by James Nelson, this is a beautiful and inspirational listen. CD booklet contains comments from the composer and the director.