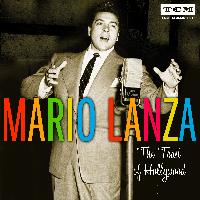 Mario Lanza started out in the world of opera and the concert stage, but became an international star when his golden voice began to ring out from the celebrated soundstages of Metro-Goldwyn-Mayer. By shifting to film work, he believed he was bringing good music - and grand opera in particular – to more people through his movies than he could ever hope to from the classical stage.  Luminaries like Luciano Pavarotti, Renée Fleming and tenor Joseph Calleja tended to agree, each of them citing the tremendous impact Lanza’s groundbreaking film The Great Caruso had on their respective careers.  The Toast of Hollywood displays the full range of Lanza’s vocal brilliance in a glittering compilation of popular ballads, opera arias, classic show tunes, and jewels from the Great American Songbook, including six previously unreleased gems.


Disc 1, “A Tenor at the Movies,” covers the Hollywood years, with songs and arias made popular by Lanza in his classic musicals for MGM.  Standouts include his signature tune, “Be My Love,” written for him by Nicholas Brodzsky and Sammy Cahn for The Toast of New Orleans; a sublime, one-take recording of the famous “Serenade” from The Student Prince; and a sensational “Granada,” one of the musical high points in Because You’re Mine.  Lanza’s Hollywood recordings also included classic opera arias, and this disc features Verdi’s “La donna e mobile” (from Rigoletto) and “Libiamo ne' lieti clici” (from La Traviata) among others.

Disc 2, “A Tenor in Love,” is chock full of songs of love and longing, all recorded for “The Mario Lanza Show” radio broadcasts in 1951 and 1952.  Its many treasures include “Day In, Day Out,” Rube Bloom and Johnny Mercer’s hooray-for-love salute to hopeful romantics; a ravishing “’A vucchella” that positively bursts with bright Italian sunshine; and a sweet and tender “My Romance,” here making its debut on CD.  Lanza also pays tribute to the composers and lyricists of musical theater and the Great American Songbook with his inimitably passionate renditions of songs by Cole Porter, Jerome Kern, Rodgers & Hammerstein, and more.  Some selections include the singer’s own spoken introductions.

Mario Lanza lived life to the fullest, but died in 1959 at only 38. The Toast of Hollywood is bound to delight not only lovers of Hollywood’s golden era, but those of any generation who appreciate how a voice for the ages can turn music, both popular and operatic, into timeless classics.

On Wednesday, Sept. 18, beginning at 8 p.m. (ET), Turner Classic Movies will celebrate the life and career of Mario Lanza with a night featuring five of his most beloved films. The following is a complete schedule: