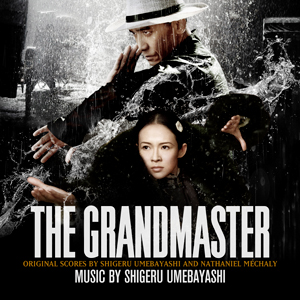 The Grandmaster [2013]
Music By Shigeru Umebayashi and Nathaniel Mechaly

THE GRANDMASTER is the highly-anticipated new film by acclaimed director Wong Kar Wai. Six years in the planning and three years in the making, THE GRANDMASTER is an epic action feature inspired by the life and times of the legendary kungfu master, Ip Man. The story spans the tumultuous Republican era that followed the fall of China’s last dynasty, a time of chaos, division and war that was also the golden age of Chinese martial arts. Filmed in a range of stunning locations that include the snow-swept landscapes of Northeast China and the subtropical South, THE GRANDMASTER features virtuoso performances by some of the greatest stars of contemporary cinema.

How can you go wrong on this, the trailer looks awesome... the soundtrack/score is awesome! -Jeremy [Retro]

This movie looks awe-inspiring. I watched some videos on YouTube and he looked amazing even in his 80s.