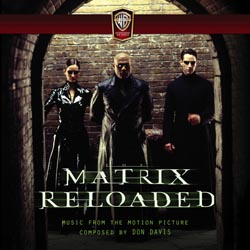 
La-La Land Records, Warner Bros. and Warner Bros. music continue celebrating Warner Bros.' 90th anniversary with this deluxe, 2-CD expanded archival collection release of Don Davis' phenomenal original score to the 2003 motion picture THE MATRIX RELOADED, the second installment in THE MATRIX SAGA starring Keanu Reeves, Laurence Fishburne and Carrie-Anne Moss, and directed by the Wachowski Siblings. Experimental and atmospheric, yet orchestral and thematic, Don Davis' score is a sci-fi action wonder onto itself. Clocking in at more than 150 minutes, this spectacular 2-CD set was produced by Don Davis, Neil S. Bulk and Dan Goldwasser, mastered by Mike Matessino and is limited to 3500 units. In depth, exclusive liner notes by Tim Greiving feature comments from Mr. Davis and co-composer (on some tracks) Ben Watkins (aka Juno Reactor).
Just Announced! Think of you want of the series, the best stuff you can take away from them is the scores/soundtracks.
-Jeremy [Retro]
Hosted by Unknown at 4:15 AM

The music from the first film are my all time favorite Jeremy. Nice set!